Between 1930 and 1945 major suburban development in Winston-Salem and the West End came almost to a standstill. Several automobile suburbs had developed in the 1920s such as West Highlands, Buena Vista, and Reynolda Park, and some West End residents had moved to these areas. For the most part, however, the West End remained a stable neighborhood of families who had invested in the area.

After WW2, building in Winston-Salem began to boom again. In 1948 the Board of Aldermen voted to expand the city limits for the first time since 1927, annexing Buena Vista, Ardmore, and other sections. Building picked up again in the West End, but this time it was more modest post-war housing and commercial buildings, and it seemed that the West End’s era as Winston-Salem’s fashionable neighborhood was over. The neighborhood was dealt a severe blow in 1948 when its zoning category was classified as R1 – high density apartments and offices. Many of the West End’s large single-family residences were poorly adapted to multi-family apartments, and some of the houses were torn down to make way for commercial buildings. 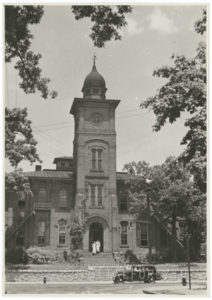 The former West End School on Fourth Street was demolished to make way for a large Sears and Roebuck store, and across the street the home of North Carolina Governor Robert Glenn came down to be replaced by Modern Chevrolet. On West Fifth Street the former home of R.J. Reynolds was demolished in the early 1950s and the Forsyth County Library took its place.