This plain but handsome two-story, two-bay wide, pebbledash house has a hip-roof, twelve-over-one sash windows with louvered wood shutters, a bay window on either side (the one on the north side added ca. 1979), and a hip-roofed front porch with paneled posts and a plain balustrade. The house was originally located at 506 Second Street, where its longest association was with the Maynard family, whose various members occupied it from at least 1925 to 1950. When threatened with demolition by encroaching commercial development, the house was moved to its present site in 1978, where it once again complements and is complemented by its surroundings. (SH, TR, CD)

Also moved from that area of 2nd Street in 1978 was McGehee-Richardson house (44) one block over to N. Spring. 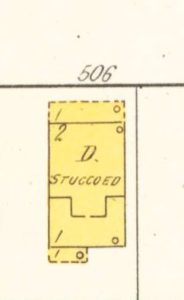