The McGehee-Rierson House is a two-story frame, Queen Anne style house characterized primarily by its irregular configuration, multi-gabled roof (the main front gable clipped), and its bow fronted porch with turned posts and balustrade and fancy sawnwork brackets. The 1917 Sanborn Map (see below) shows that the porch originally wrapped around the right corner of the house. It appears to have been enclosed in the 1920’s or 1930’s. During the last decade, the house was covered with aluminum siding, replacing the asbestos shingle siding which had earlier covered the original weatherboards. Because it matches in width the original siding and does not obstruct any details, the aluminum siding does not significantly diminish the architectural integrity of the house.

The house was built at the northwest corner of Spruce and Second Streets for W.H. McGehee, an employee of Brown-Rogers Company His family resided there until 1917, when Maggie Rierson, a teacher at West End School, purchased the property. She lived in the house and retained ownership until 1978. When in that year the house was threatened with demolition, John P. Ozmun purchased and moved it to the present site, a double lot which had stood vacant for some years. It was originally the site of the R. P. Sartin House, a ca. 1900 two-story frame dwelling of irregular configuration. Because of its compatible scale, material, period, and style, the McGehee-Rierson House makes a positive contribution to its new West End environment. (SH, TR, CD)

Behind the house stands a noncontributing weatherboarded frame workshop, the size and plan of a two-car garage, built in 1984. 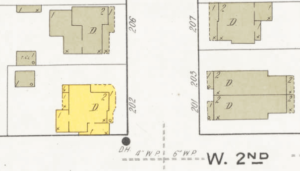