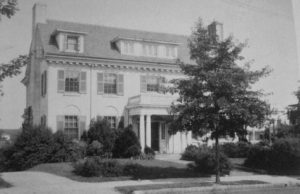 Designed by prominent local architect Willard Northup, the Galloway House is one of the most outstanding Colonial Revival dwellings in the West End. It was featured in the prestigious 1924 publication, Art Works of Piedmont Section of North Carolina (as seen here, Part-1, Page 5).

With its white stuccoed walls and green tile gable roof, the two-story house suggests the influence of Charles Barton Keen’s design for Reynolda House. The Galloway House features a row of front dormers, a modillioned cornice, a five-bay facade with first story windows set within blind arches, and a Federal style central entrance with six-panel door, fancy sidelights, and a fanlight transom. Matching entrance, north side, and rear porches have Tuscan columns, a full entablature with a triglyph-and-metope frieze, and a balustraded upper deck. The interior is richly detailed with a variety of Federal Revival and transitional Federal-Greek Revival style mantels, two handsome stairs, the main one having a spiral newel and a ramped handrail, and flat-panel wainscoting. Behind the house is a terraced garden.

Ida M. Galloway purchased the property in 1912, but she and her husband, Robert, continued to live in their Fifth Street house (177) until building this house is 1918. Ida was the daughter of wealthy Frank Miller (see 176 and 108), and Robert Galloway was president of Smith-Phillips Lumber Company. This remained the Galloway residence until 1972. (TR, CD, OS, AW)