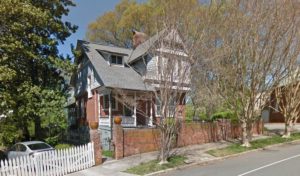 Among the oldest and best-preserved houses in the West End, the Miller-Galloway House is an excellent example of a transitional Queen Anne-Colonial Revival dwelling. The pristine one-and-a-half-story house has a common bond brick first story, a wood shingled upper story, a gabled roof with wooden sunburst panels in the gable peaks, a small shed dormer, and windows with the upper sash bordered by small panes of glass. An unusual feature is the way in which the upper story of the gabled facade wing projects beyond the brick first story and is supported by heavy carved brackets. Across the left half of the facade is an engaged porch with turned posts and balustrade, sawnwork brackets, and a spindled frieze, The nicely detailed interior includes a closed string stair and a variety of late Victorian mantels.

In 1892 the property was owned by the “Frank Miller Estate.” Miller’s house and stables adjoined the property to the east (see #108 & 176). During renovation of the house, the inscription “JR Miller, Sept. 9, 1892” was found on the back of a door casing. In the 1900’s, Linton Leary, a photographer, was listed in the city directory at this address. He and his wife, Lula, were still listed there in the 1904/05 directory, but from 1906 to ca. 1920 (when they moved to a larger house on West End Boulevard) this was the residence of Robert S. and Ida Miller Galloway. She was the daughter of Frank Miller, and he was an accountant at RJ Reynolds Tobacco Company and later the president of Smith-Phillips Lumber Company. The Miller Estate retained ownership of the house until 1948, but after the Galloway’s moved, occupancy changed frequently. (TR, CD, OS) 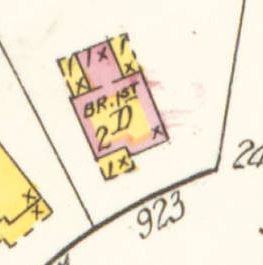