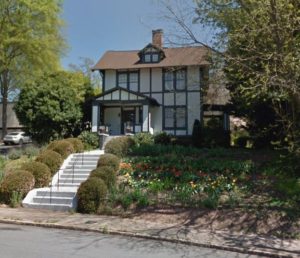 The Taylor House is one of the few examples of the Tudor Revival style in the West End. All the wall surfaces, including the gables, are “half-timbered” with pebbledash infill. Other features include widely overhanging eaves with shaped brackets, an off-center entrance porch with pebbledash posts and balustrade, a now-enclosed south side porch, and a rear sleeping porch.

Minerva Sheppard Taylor, daughter of Benjamin J. Sheppard who lived immediately behind at 420 Summit Street (#106), was the first listed owner of this lot. She and her husband, Charles, an employee at Taylor Brothers Tobacco, were first listed at this location in the 1915 city directory. The house remained in family ownership until 1961. (TR, CD, SH) 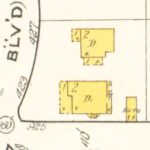