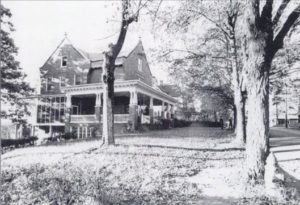 The Sheppard House is an imposing two-story brick dwelling whose eclectic design is unique in Winston-Salem. The main stylistic features of the asymmetrical house include a parapeted gable roof with finials crowning each gable peak; Tudor labels over the windows; and a richly detailed wrap-around porch with a modillioned cornice, groups two or three bulbous colonettes with tobacco leaf capitals set on high brick plinths, a turned balustrade, and a paneled ceiling. The interior features a small vestibule with a high paneled wainscot which leads into the well-developed front stair hall with its heavy late Victorian closed string stair, high paneled wainscot, heavily molded wood cornice, paneled doors, and Colonial Revival fireplace mantel. Other rooms are more simple, but contain a variety of handsome mantels.

Benjamin J. Sheppard, a native of Richmond who moved with his wife, Rosa, to Winston-Salem in 1876, purchased this property in 1892 and built the house soon thereafter. From 1876 to 1904 he was a tobacco leaf dealer, and from 1904 until his retirement ca. 1925 he operated Sheppard Veneer Company. Sheppard was a charter member of the Twin City Club, served as treasurer of the YMCA., and was an elder in First Presbyterian Church. He died in 1939. (CD, WSJ, OS)

Garage, Contributing: Behind the house stands a two-car, pyramidal-roofed, brick garage which appears to pre-date 1930. 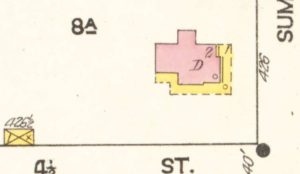 Sheppard Veneer appears on the same map just North of town on the tracks of Southern Railroad. Today this would be where the tracks pass just behind the Post Office on Patterson. 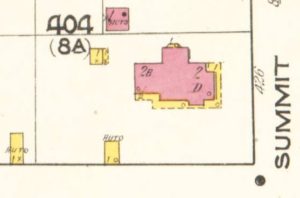