The Pardue House is a one-story weatherboarded frame cottage characterized by left front and right side gables and a hip-roofed facade porch with Tuscan columns and a plain balustrade. Its asymmetrical form and Classical detailing make it a part of the collection of late Victorian-Colonial Revival houses in the West End.

After having a string of owners and occupants during its early years, the house was purchased by John Virgil and M. Ethel Pardue in 1936 and was occupied by them for the next forty-five years. Pardue was a grocer. (SM, TR, CD) 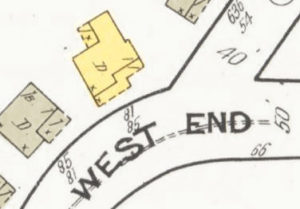