The Blumenthal-Goodman House is a well-preserved vernacular Queen Anne house. The two-story weatherboarded frame dwelling has a gabled and hipped roof, with the flush sheathed front gable having a gable peak ornamentation; sixteen-over-two sash windows; a front porch with turned posts, a turned balustrade, and sawnwork brackets; and a decorative entrance with a stained glass and wood paneled door and a transom.

When the preservation of the house was threatened by adjacent industrial expansion and other incompatible developments, the house was moved in 1977 to its present location by Jones C. and Martha Abernethy. At its present site, the house filled unattractive vacant land and was once again able to complement and be complemented by its architectural surroundings. (CD, TR, SH)
Behind the house is a noncontributing1980’s one-car weatherboarded frame garage/storage building with a gable roof. 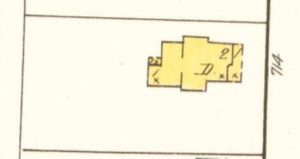