The Cash-Wall House is a basic one-and-a-half-story frame bungalow typical of many built in the 1910’s and 1920’s, including some of those found elsewhere in the West End. Salient features include the broad gable roof which continues well beyond the front and rear elevations of the house to shelter engaged porches and the shed dormers on the front and rear roof slopes. Although the house has been sheathed in aluminum siding during the past decade (1970’s ?), its overall integrity remains strong because the original form and majority of the detailing have been well preserved.

Frank B. and Pauline Cash were the original occupants, who lived in the house until it was purchased by the Dinin family in 1925. Maude and William Hall were the longest occupants, owning the house from 1944 to 1979. (SM, CD, TR) 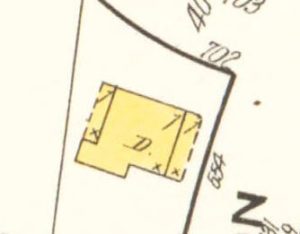