The Wommack House is a well-preserved one-and-a-half-story frame dwelling with many typical characteristics of the bungalow house type. The handsome house has a weatherboarded first story, a coursed wood shingle upper story, a steep gable roof with widely overhanging braced eaves, a matching front dormer, an off-center gable end chimney, grouped bungalow windows, and an engaged porch across the left two-thirds of the facade with a tapered wood cornerpost, brick plinths, and a plain balustrade.

Downhill behind the house, and facing Crafton Street, is a non-contributing multi-car garage of rusticated cast stone blocks and a shed roof which is built into the side of the hill. It was probably built after 1930. 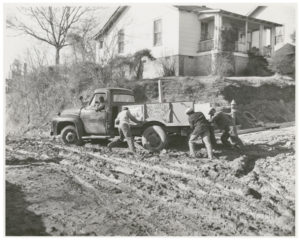