The Davis house is a large, two-story frame house with the kind of late Victorian irregular massing but Colonial Revival detailing frequently found in the West End. It has a combination of pyramidal and gabled roof, small pedimented dormers, and a porch with Tuscan columns which follows the broken outline of the facade. The house was sheathed with asbestos shingles during the mid-twentieth century, but this has not destroyed its architectural integrity

From 1908 to 1925 various members of the Davis family were listed in the city directories at this location, including J. Neal Davis, who operated a dry goods business, Hattie F. Davis, a stenographer, and her husband, J. Bruce Futrell, secretary-treasurer of The Vogue, and Egbert L. Davis, a salesman for R. olds Tobacco Company. In 1927 J.O. Wagoner purchased the house, and it has changed hands frequently since then. (CD, TR, SM)

Behind the house is a noncontributing one-car rusticated block garage with a pyramidal roof which appears to have been built post 1930.

Also behind the house is another noncontributing one-car concrete block garage with a pyramidal roof which appears to date from the mid-twentieth century. 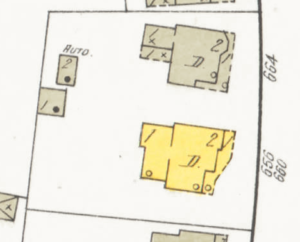