Changes to the house include the addition of aluminum siding (mid-twentieth century), the removal a balustrade above the center bay of the porch (date unknown) and the recent addition of a wooden fire stair at the north end of the porch. Despite these changes, and the fact that during the mid-twentieth century the house was sensitively converted to four apartments, it retains its basic form and most of its significant details and therefore still contributes to the architectural character of Spring Street and the West End.

Original occupants were Dr. W. Clinton Linville and his wife, Fannie. By 1920, Linville’s sister, Bettie, and her husband, Gideon H. Hastings, an attorney (later a judge), were living in the house. They purchased it in 1922 and retained ownership until 1941. (CD, TR, SH, OS) 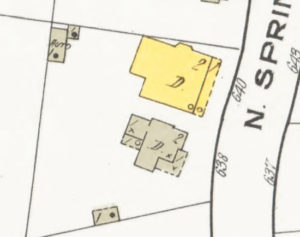