The Douglas House combines late Victorian irregular massing with Colonial Revival detailing. The two-story frame house has a multi-gable roof, with some of the sparse ornamentation seen in the Palladian Window of the smaller front gable and in the trefoil attic vent of the larger gable. The present front porch features Tuscan columns and a slightly projecting pedimented entrance bay. However, the 1917 Sanborn Map shows only a corner wrap-around porch. The porch was probably altered in the 1910’s or 1920’s, when the south side porch was converted to a sun room. In the last decade the house was sheathed with aluminum siding, but this was done without obstructing any of the detailing and has had little effect on the overall architectural integrity of the house. The interior includes a closed string Colonial Revival stair and several typical Colonial Revival mantels.

Thomas S. Douglas purchased the property in 1907 and was listed at this location in the 1908 city directory. He was a traveling salesman. The Douglas family retained ownership until 1955. One of T.S. and Fannie Douglas’ sons, Wilson, experimented and made the first Douglas storage battery in the garage (no longer standing) on Spring Street Later he and his brother, Thomas Jr., built the Douglas Storage Battery Company into the large industry which it is today. (TR, CD, SH, I-Susan Douglas Elster) 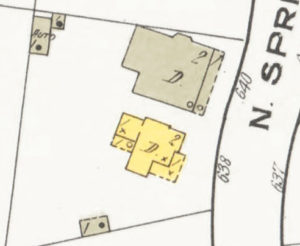