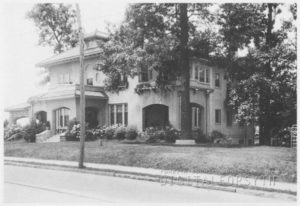 The Shore House is a rare example in the West End of the Spanish Mission style. The two-story stuccoed house is well-detailed with a hipped green tile roof with matching front dormer, widely overhanging eaves with shaped rafter ends, grouped windows with ironwork “balconies”, some arched windows, a central entrance with sidelights and fanlight transom, and a central entrance porch with heavy stuccoed supports, a tile roof, and a parapeted deck. The rear boasts an engaged, arcaded porch. The central two-story block is flanked by short one-story wings. Extending from these, and somewhat recessed, are long one-story stuccoed wings, probably added in the 1960’s. These detract from the architectural integrity of the house, but do not destroy its strong architectural character. The central, formal core of the house is richly detailed in a combination of Colonial Revival and Gothic Revival features. Of particular note are the Roman Doric arcade dividing the front foyer from the rear “hall”, the heavily molded cornice, the grand stair with turned balusters and spiral newels which winds around the large central room, the three lancet-arched niches with leaded glass doors, and the monumental stained glass windows of the second floor stair landing.

In 1919 Kerner E. and Bessie Nissen Shore purchased this property on Fourth Street. He was president and treasurer of Carolina Cadillac Company, and she was of the Nissen Wagon Company family. By 1923 they were listed at this location in the city directory. In 1930, they sold the house to Security Life and Trust Company (later Integon Corporation) for its home office and moved to Clover Street. After 1953 the house had a succession of owners, one of whom leased the property to Western Electric from 1965 to 1971, when it was purchased by the present for use as a dance studio. (D, CD, NCAC)

Garage/servant’s house, Contributing: Behind the house and abutting Taylor Street is a three-level garage and servant’s house which fits into the side of the hill. One of the most significant outbuildings in the West End, it matches the house with stuccoed walls and a green tile roof with bracketed eaves. Exterior steps lead from Taylor Street to the upper level of the building and the back yard of the house.