The Myers House is a simple but imposing late Victorian-Colonial Revival dwelling set on the hillside above West End Boulevard The two-story weatherboarded frame house is primarily decorated by its fanciful roof – a central pyramid enlivened by multiple large and small gables with Palladian windows or lunettes. The house also features a wrap-around porch with square posts and a pedimented entrance bay. The south side section was enclosed, probably in the mid-twentieth century.

The house was likely built by William T. Myers, a Hitchcock-Trotter Company department store employee, who owned the property from 1910 to 1926, occupying it from at least 1912. (D, CD, SM, TR)
Behind the house stands a non-contributing, German-sided frame apartment with a broad gable roof, dating from the mid-twentieth century. 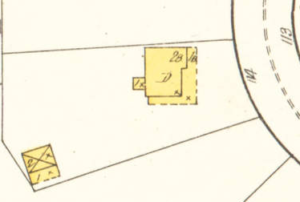