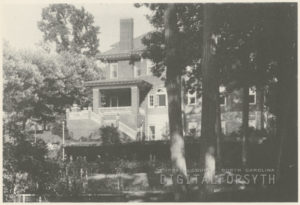 The Thomas House is one of the grandest and most richly detailed houses in the West End. The large two-story dwelling is a flamboyant interpretation of the Colonial Revival style, one that shows the influence of the Craftsman style. The exterior is characterized by Flemish bond brickwork; a truncated hip tile roof; hipped dormers with battered sides; overhanging bracketed eaves with paneled soffits; six-over-one sash windows with decorative flat-arched and round-arched lintels; some stained glass windows; a large Palladian window on the northwest side; a handsome Classical entrance with Tuscan columns, a round-arched transom, and a pedimented entablature; a balconied window above the entrance; and a balustraded terrace across the five-bay facade. On the northwest side of the house is a porch with a grand flight of steps leading down to what was originally the garden, and on the southeast side of the house is a porte-cochere with battered brick posts.

The interior of the Thomas House echoes the richness of the exterior. Significant interior features include parquet floors, plastered walls and elegantly molded cornices and ceiling medallions, several varieties of wood paneling, Federal Revival mantels, a Classical colonade, and a stair with a spiral newel, turned balusters, and curved balustrade around the second floor landing. During the recent restoration-renovation of the house an inscription was uncovered on one of the plaster walls which said, in part, “Decorated by J.G. Valiant Company, Baltimore, Maryland, Nov. 10, 1920.” In operation between 1874 and 1941, Valiant was one of the leading decorating firms on the east coast. The well-recognized company did the interior design of Graylyn, the Bowman Gray mansion in Winston-Salem.

The Thomas House was one of those featured in the handsome 1924 publication “Art Work of the Piedmont Section of North Carolina”. Charle H. Thomas acquired full ownership of this property in 1915. He was president of Home Furnishings Company, the Carolina Iron Company, the C.M. Thomas & Company, the American Oil Company, and was secretary of the Orinico Sand Company Thomas was first listed at this location in the 1922 city directory, and was last listed in 1930, the year he sold the property to Harper. The house subsequently changed hands several times and was used for years as apartments. (D, CD, AI, GNRE)
Garage/servant’s quarter, Contributing: Although additions have been built to either side of this structure, it remains a significant outbuilding contemporary with the Thomas House. Matching the house, it is a two-story Flemish bond brick building with a green tile hip roof.