Included in the district is the section of Hanes Park (about one-third of the total park) extending southeast of Peters Creek (including the creek) from Pilot View Street / Reynolda Rd. at the north end to Glade Street at the south end. This part of the park forms a large section of the western boundary of the district. From roughly north to south, the park includes open land with a wooded border along West End Boulevard between Pilot View and Clover Streets, a small playground, a stone work main entrance and steps leading into the park (see below), an avenue of trees between the entrance and the footbridge (see below), a stone and iron lattice footbridge over Peters Creek (see below), a set of tennis courts (see below), a small parking area, a low iron lattice footbridge (smaller in scale, lighter in weight, more simple, and probably of later date than the main bridge) over the creek connecting the ball field with Wiley School grounds, and a field with two rough baseball diamonds and two small and rather inconspicuous sets of bleachers along the west side. Willow trees randomly planted along the creek add to the picturesque quality of the park.

The prominent Hanes family had several houses in the West End, and P.H. Hanes, Sr. donated the land for the park. The bronze plaque at the entrance to the park says, “This forty seven acre tract of land given by P.H. Hanes, Sr. in the year 1919 to be used as a park for the benefit and pleasure of the citizens of Winston-Salem”. Through the years it has provided recreational space not only for the people of the city in general, but particularly for the residents of the West End.

The larger portion of the park, not in the district, includes a baseball field with bleachers, several running tracks, a large group of tennis courts, a tennis center building, the Reynolds High School gym, and the various buildings of Wiley School, along with open and tree-bordered land. Because of its large amount of recent development and closer associations with the schools and another neighborhood, this section was excluded from the West End district nomination. 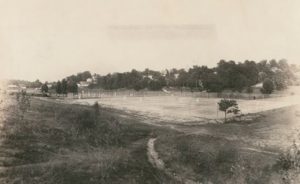