This delightful Queen Anne cottage was built ca. 1893, while its unusual porch probably dates from ca. 1915. Typical of its period, the house has an asymmetrical configuration, a pyramidal roof with decoratively shingled cross gables (the front gable with a curvilinear bargeboard), novelty siding, and Queen Anne style sash windows. Adding to the fanciful character of the house is the wrap-around front porch, treated as an “arcade” sheathed in square-cut wood shingles and connected by a plain balustrade. The property includes a wooded lot on the east and a stone-terraced lot on the west.

Ownership and occupancy changed frequently during the early years of the house. In 1912 it was purchased by wholesale grocer Norman P. Stone. He occupied the property for approximately a decade and then rented it until selling the house in 1963. (OS, CD, SH) 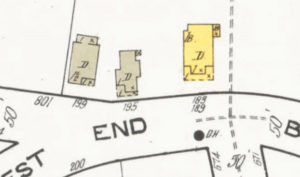