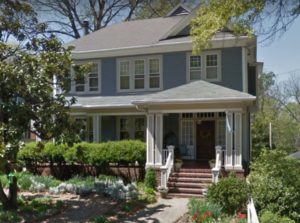 The Perry House is a two-story frame dwelling which appears to have been built ca.1917 and enlarged and remodeled later, possibly in the 1920’s. The simply detailed but handsome house has a hipped and gabled roof, grouped nine-over-one and six-over-one sash windows, and an entrance porch with square Classical posts on corner brick plinths which shelters a doorway with broad sidelights and transom. A terrace continues from the right corner porch across the rest of the facade.

Judging from the 1917 Sanborn Map (below) and the present appearance of the house, the SW bay may be a sensitive early addition. The National Register description suggests the house was sheathed in aluminum siding at the time of the survey.

During its earliest years the house had several owners and/or occupants, including Aaron A Myers, Mitchell S Lyon, and EB Hastings. The longest period of ownership was with the Frank and Elizabeth Perry family, who owned and occupied the property from 1936 to 1954. (SH, TR, CD) 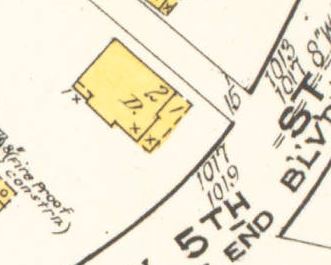