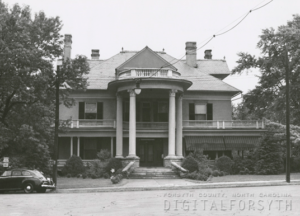 The Tise House is one of the most outstanding Neo-Classical Revival dwellings in Winston-Salem. The two-story brick structure has a hip roof with pedimented cross gables and dentiled cornice; a one-story wrap-around porch with Ionic columns, battered granite plinths, a granite foundation with segmental-arched ironwork grills, a turned balustrade, and a dentiled cornice; and a monumental two-story Corinthian central portico. 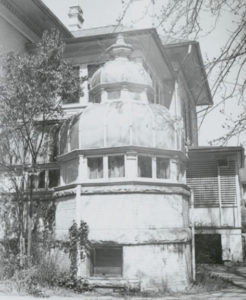 Alterations (of unknown date), which include the removal of the shaped parapet from the front gable, the balustrades from the upper decks of the portico and porch, two of the Corinthian capitals from the portico, and part of the west side porte-cochere, have been a definite loss to the building, yet have not been sufficient to change its status as a highly significant property in the West End. A double-leaf entrance with elaborate leaded and beveled glass sidelights and transom leads to the generously-proportioned and richly-detailed interior. Primary features include an ornate Colonial Revival paneled stair with bronze Classical figures atop the spiral newels, a high paneled wainscot, sliding pocket doors, Colonial Revival mantels, original lighting fixtures, and delicate plaster ceiling moldings.

J. Cicero Tise (1855-1917) engaged in several careers, but by the time he built this house he was a prominent real estate developer. He was the owner of the Vade Mecum Springs resort in the Sauratown Mountains of Stokes County. After Tise’s death, the Woman’s Club of Winston-Salem purchased the house in 1925. (D, CD, HNC) 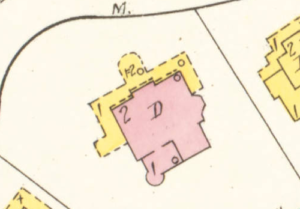 The NC Room has a great post on the prominent Tise family here.