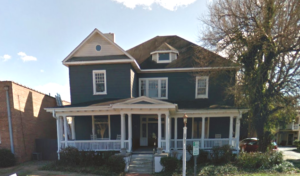 The two-story frame structure has a slate hip roof with intersecting pedimented gables, dormers, and a modillioned cornice; twelve-over-one sash windows; and a front porch with Tuscan columns, a plain balustrade, a pedimented entrance bay and a modillioned cornice. Alterations include asbestos shingle siding and the enclosure of a small part of the porch to create a vestibuled entrance. Probably dating from mid-century, these changes do not destroy the architectural integrity of the house.

Original owner Madison D. Stockton was vice-president of Mock-Bagby-Stockton Company (men’s furnishings), vice-president of Carolina Ice & Coal Col., treasurer of Huntley-Hill-Stockton Company (furniture and funeral directors and embalmers), and secretary-treasurer of the BF Huntley Furniture Company The house remained in the Stockton family until 1949 and was used for some years thereafter by the American National Red Cross. (TR, CD, SH) 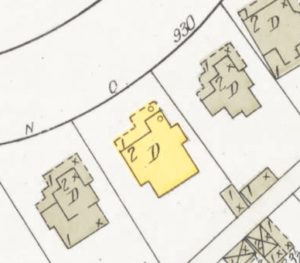