The well-preserved Joyner’s Grocery is one of the oldest buildings in the West End and is the most significant of the commercial buildings. It is a flat-iron shaped building, constructed to fill its odd-shaped lot at the corner of Fourth and Burke Streets.

The two-story brick structure has a plain, parapeted roofline, a heavy bracketed cornice along the Fourth Street side, four-over-four sash windows with segmental-arched heads, and a shop front with a recessed entrance and a gridwork glass transom. At the west end of the building is the entrance to the second floor stair.The building was probably erected by Frank Miller, a prominent real estate developer, who listed the property for taxes in 1892. It remained in his family ownership until 1971. 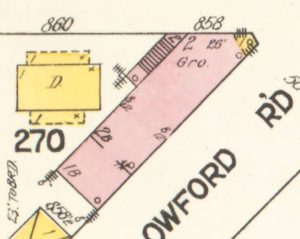