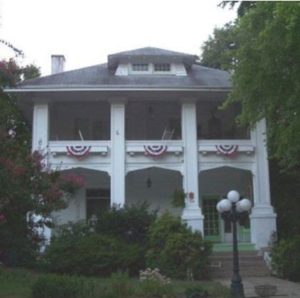 This stately house is an unusual combination of the Neo-Classical Revival and Craftsman styles. The two-story frame dwelling has a hip roof with widely overhanging eaves, matching hipped dormers, and a dominating two-story engaged front porch with heroic paneled posts set on brick plinths and a Tudor-arched frieze with Craftsman planters above it at second floor level. On the southeast side of the house is a porte-cochere, balanced on the northwest side by a two-story octagonal bay window. In recent years the house was aluminum sided, but this has not significantly harmed its overall integrity.

The house appears on the 1917 Sanborn Map and was listed as the residence of John W. and Helen Wix in the 1918 city directory. In 1921 Laura S. McGehee bought the house and owned it until 1933. At that time SJ Craver purchased the property, although it was the H. Frank Craver family who occupied the house. The Cravers owned it until 1969. (TR, CD, SM)

Garage, Contributing: Behind the house is a two-car weatherboarded garage with a hip roof which appears to date from before 1930. 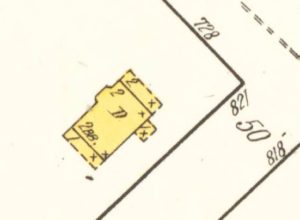