This two-story frame structure exhibiting a combination of the Craftsman and Colonial Revival styles is located on an imposing terraced lot on the Summit Street hill. Sheathed in wood shingles, it has a hip roof with overhanging boxed eaves, eighteen-over-one sash windows, a front entrance with sidelights and transom, and a heavy front porch with squat Tuscan columns set on brick plinths with granite caps. Sanborn Maps suggest that originally the porch extended across only the right two bays of the facade, but when and if the porch was altered is not known.

William H. McGehee, an employee of the Brown-Rogers Company, purchased this property in 1913, and was listed in the city directory at this location by 1916. The McGehees retained ownership until the present owners purchased the property in 1961. (TR, CD, S l, OS) 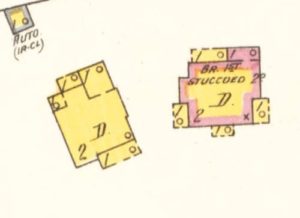