The form and rich detailing of the Orr House make it one of the most outstanding examples of the Colonial Revival style in the West End. It is a two-story shingled house with a broad pedimented gable roof, a dentiled and modilioned cornice, classically-detailed dormers, and a center bay entrance which is the stylistic focal point of the house. The meticulously Classical porch has Roman Doric columns, a full dentiled entablature with a broken pediment, and a barrel-vaulted, coffered ceiling. Above the entrance is a delicately detailed Palladian window. On the north side of the house is a Classically-detailed porch and porte-cochere.

GW Orr, secretary of RJ Reynolds Tobacco Company, was first listed at this location in the 1916 city directory. He and his wife, Conners, owned the property until 1935. It then changed hands several times until 1951, when Kenneth and Helen Hoover purchased the house, retaining ownership until 1985. (CD, SH, TR) 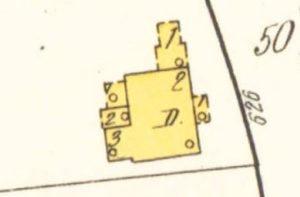