The Pegram-Apperson House is one of the oldest in the West End. The transitional Queen Anne-Colonial Revival style dwelling is a two-story frame structure of irregular configuration, with novelty siding (which in mid-century was covered in asbestos shingles, now mostly removed), a steep pyramidal roof with multiple wood shingled cross gables, a front porch with Tuscan columns and a plain balustrade, and a matching center bay balcony porch with a bowed balustrade. The porch originally wrapped around the south corner of the house, but this was enclosed, probably during mid-century. Most of the sash windows are the nine-over-one Queen Anne variety, but the primary facade window is a thirty-over-one sash.

Local tradition claims that the architect Hill Linthicum designed this house ca. 1893 for the Pegram family, and the 1894/95 city directory does list TH Pegram, in the real estate and building and loan business, as living on Summit Street. In 1899 TB Apperson listed the property for taxes, and the house remained in Apperson family ownership until 1938. (OS, CD, TR, SM) 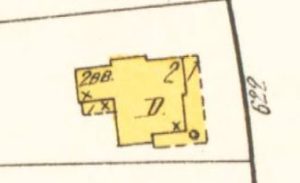 While earlier Sanborn Maps exist, this part of the West End was not detailed in prior maps.