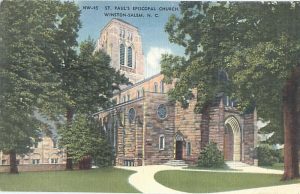 Saint Paul’s. In 1876 an Episcopal congregation was formed in Winston-Salem, and in 1879 a Gothic Revival frame church was consecrated at the corner of Pine (now Marshall) and Fourth Streets. This first church was replaced in 1908 by a stone Gothic Revival church designed by prominent local architect Willard Northup and located at the northwest corner of Fourth and Cherry Streets (1918 Photo).

In 1927 the congregation purchased the house and lot of John Cameron Buxton on Summit Street for the third, and present, building. Ralph Adams Cram, of the Boston architectural firm of Cram and Ferguson, was selected as the architect, with Harold Macklin assisting as local architect. Cram (1863-1942) was a distinguished ecclesiastical architect, philosopher and author, who, in the latter years of his life became America’s leading exponent of the Gothic Revival. His highest architectural achievement was the Cathedral of Saint John the Divine in New York City. Jacob and Young, the New York contractors who had built Street John’s, were chosen as the contractors for Saint Paul’s.

The cornerstone was laid July 8, 1928, and the first service in the new church was held on September 8, 1929. Located on an imposing site with a dramatic western view, Street Paul’s is a monumental granite structure with sandstone trim. It is modeled after thirteenth century Gothic architecture, complete with lancet-arched stained glass windows (including clerestory windows), lancet-arched portals, buttresses, and a tower which rises ninety-three feet above the transept crossing. 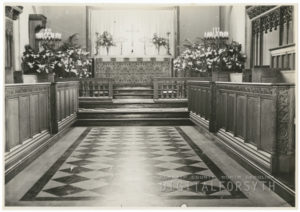 The fully developed Gothic interior is characterized by bold simplicity and excellent craftsmanship. Designed to seat 800, it fea

tures marble flooring, a timbered ceiling, a vestibule, a center aisle nave with a rear balcony, arcaded side aisles, and a chancel with elaborate wood-carved detailing. Beneath the sanctuary as well as in the south side wing are a full complement of parish house facilities, including a kitchen, a dining room, classrooms, parlors, and an assembly hall.

In 1957 the present education building was completed on the north side of the church. Carefully designed by Luther Lashmit to minimize its actual size, the building appears from Summit Street to be a one-story brick structure with a flat roof. Because of the hillside terrain, however, the rear of the building shows that it is actually three stories.

Likewise, its two-story connector with the church can barely be seen from Summit Street The education building stands on the site of the Colonial Revival Clement Manly House, which was bequeathed to Street Paul’s at the death of Emily Buford Manly in 1938, It was used as the rectory until 1948.

Behind the church is a small parking lot and a playground. (SPEC, AG)