A map of Winston and Salem North Carolina – and the surrounding land as far as it was owned by the Congregation of the United Brethren, Salem, NC. Compiled from the Original Surveys by E.A. Vogler, Salem NC, 1876. This image is a re-tracing by Hinshaw and Ziglar Civil Engineering done in 1915 of the1876 original. 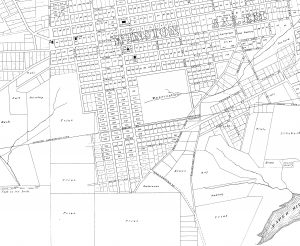 To get your bearings, the “Y” just off center to the bottom right is now known as the fork of Burke & First, then known as Shallowford Street to the left and Shallowford Road to the right, which ran west out of town to the “shallow ford across the Yadkin River.”

The Paper Mill Pond in the bottom right of the map was one of the earliest in the state, dating back to 1790 (see www.historync.org).  The remains of the pond-dam can still be seen where Academy Street (formerly known as Paper Mill Pond Road) crosses Peters Creek Parkway. Paper Mill Pond once filled the troughs below what is now known as West End South. £

Notice the small “Quarry” near the modern Intersection of Wachovia and Gregory on the other side of Peters Creek.