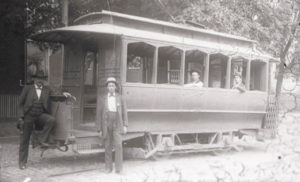 Developed at the western edge of the town of Winston, the West End was planned in 1890 by Jacob Lott Ludlow who would become a nationally-recognized municipal, sanitary and hydraulic engineer and who was Winston’s first city engineer. Ludlow’s remarkable plan of curvilinear streets and parks took advantage of the already dramatic topography of the area and formed a radical departure from the grid plans of Winston and Salem. The West End reflected Winston’s phenomenal growth period from the late 1880s through the 1920s, as tobacco and textile manufacturing reached new levels of production and Winston-Salem became North Carolina’s largest city. The economic growth of the city enabled some of its citizens to build handsome residences of the distinctive character found in the West End.