Though few in number, some of the most impressive houses constructed in the West End during the early years of the twentieth century were built in the Neo-Classical Revival style. Characterized by monumentality, the style lent instant prestige to the houses of this mode.

The most grandiose and best preserved examples of the Neo­-Classical Revival in the West End are the Rosenbacher House (163) and the J. Cicero Tise House (159).

The Rosenbacher House is a large weatherboarded dwelling dominated by a two-story central portico with Corinthian columns and a full pedimented entablature. The portico is complemented by flanking one-story quarter­ circle porches with Ionic columns. The interior of the Rosenbacher House is as impressive as the exterior with an arcade of Ionic columns, segmental-arched sliding pocket doors, numerous leaded glass windows, and other high-quality details. The nearby Tise House is one of the largest in the West End. It is a massive two-and-a­ half-story brick structure with a granite foundation ornamented with segmental arches filled with ironwork grills. 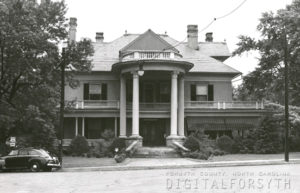 Like the Rosenbacher House, the Tise House is dominated by a two-story central Corinthian portico. Here a one-story Ionic porch wraps around three sides of the house. An impressive double-leaf entrance with leaded and beveled glass sidelights and transom leads to the generously proportioned and richly detailed interior, whose primary features are a grandiose stair with a double balustrade and bronze Classical figures atop spiral newels and a high paneled wainscot. 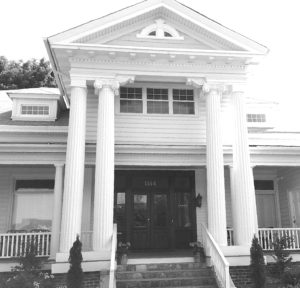 Somewhat smaller-scaled examples of the Neo-Classical Revival style in the West End are the Farish-Glenn-Bitting House (353) and the S.E. Hall House (362), both of which carry the central feature of the style, a two-story Classical portico.

The most magnificent example of Neo-Classical Revival in the West End did not survive to be included in the National Register Inventory. The 1910 Hanes-Hill house once stood on the premiere lot of all the West End – former site of the Zinzendorf Hotel. The Hanes-Hill house was demolished in 1963, though some reports suggest it was torn down as early as 1950. Two outbuildings associated with the property do still exist and are part of the West End Historic District as contributing structures 364 and 365. 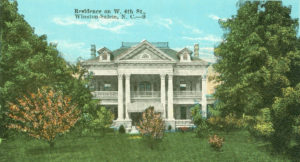