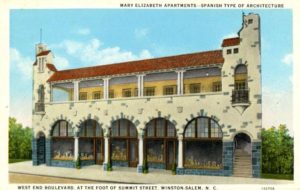 The former Summit Street Pharmacy (also known as the Mary Elizabeth Apartments for the two second story apartments) is one of the most architecturally unusual buildings in the West End. At the time of the building’s construction, a real estate agent claimed that it represented “a departure from conventional architecture which will really enhance the area,” and a developer recommended that buildings like it “completely surround the park wherever space is available.”

The two-story masonry building is designed in the Mediterranean style with detailing concentrated on the facade. The wall surface is covered with rough stucco inserted with randomly placed slate slabs in varying colors. The first story is defined by a five-bay arcade, which retains its recessed entrance although the shop windows have been enclosed with stuccoed panels (the transoms remain). The second story has a five-bay engaged porch which provides a wonderful balcony effect. A shed roof of red and yellow tiles stretches across the facade between the two end bays. The end bays house the stairs to the second floor within round arched entranceways, above which are windows (originally balconied) at second floor level. The end bays were originally capped by small turret-like projections, but these have been removed at roof height. The above-mentioned changes to the building were probably made post 1960. Although these alterations dilute the impact of the original design, the building is still of architectural significance.

C.A. Dobbins purchased the property in 1927 and the following year built the present structure to house both commercial and residential tenants. He started the Summit Street Pharmacy with Wade A. Gilliam (who initially occupied one of the apartments), and in the 1940’s James A. Way, Jr. joined the business. The pharmacy opened January 28, 1928 and had a soda fountain which extended the length of the building. With the presence of nearby RJ Reynolds High School, the pharmacy became “the gathering place for young people in Winston-Salem” in the 1930’s and 1940’s. The store at one time employed as many as fifteen “curb boys” to take orders from cars parked all the way up West End Boulevard to Brookstown Avenue. In 1968, long after Gilliam and Way had bought out Dobbins’ interest in the pharmacy, and after John W. Andrews purchased Gilliam’s interest, the business moved to 1214 Reynolda Road as Andrews-Summit Pharmacy. This building then became the office and warehouse for Coleman’s Kentucky Fried Chicken. (D, WSJ, S, CD, I-James A. Way)