The Blanton House is a one-and-a-half-story frame dwelling which is architecturally striking because of its unusual bellcast clipped gable roof, giving it a pagoda-like feeling. The house has a large hipped front dormer and a full facade porch. In mid-century the house was sheathed with asbestos shingles, but it still plays a contributing role in the architectural character of the neighborhood. Like many houses in the West End, this one has a stone retaining wall at the sidewalk and stone steps into the yard.

The first city directory listing for the house was in 1913, when Fred and Della Hinshaw were listed here, but by 1918 William C. and Helen Blanton were occupying the property, which they continued to do until at least 1930. (CD, TR)

At the back end of the lot, and facing Sixth Street, is a noncontributing building which appears to have been built post 1930. It has a shed roof and is covered with asbestos shingles. 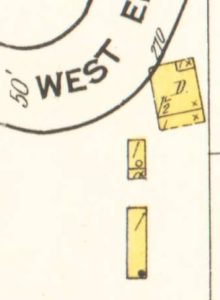 While this map shows a one-and-a-half story frame structure at the same location and in the same orientation as the current structure, no front porch is present in 1917. The full facade font porch was therefore added after the time of this map.