The Miller House is one of the most fully developed and best preserved of the Queen Anne style cottages in the West End. The one-story weatherboarded frame house has a boldly projecting right front polygonal bay; front and side shingled gables with gable peak spindlework; a front porch with a pedimented entrance bay, turned posts and balustrade, and sawnwork brackets; and a double-leaf glass and wood paneled entrance with a bull’s-eye cornerblock surround.

The 1917 Sanborn Map shows that the rear ell porch has since been enclosed and slightly enlarged (probably in the mid-twentieth century), The house had numerous owners and occupants during its early years. The longest occupant appears to have been Maude Miller, an inspector for P.H. Hanes Knitting Company, who lived in the house from at least 1939 to 1965, although she actually owned it from 1944 to 1973. (SM, D, TR, CD) 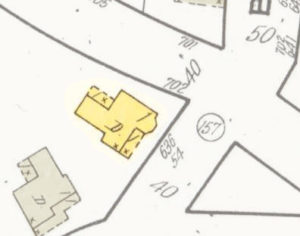