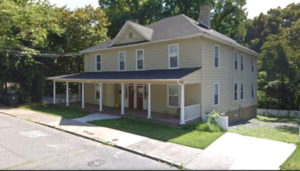 Now housing four apartments, this building was originally a duplex. It is a large two-story frame structure of simple Colonial Revival design. The house is characterized by a hip roof with an intersecting front gable, a pair of central entrances, and a porch with Tuscan columns and a plain balustrade which carries across the front and wraps around the southeast corner.

The 1917 Sanborn Map (see below) shows that the porch originally wrapped around the NE corner as well. The glass and wood paneled entrances with applied garland ornamentation, sidelights, and transom lead to halls with simple late Victorian-Colonial Revival stairs and beaded board wainscots. Probably during the third quarter of the century, the house was sheathed with aluminum siding, but this has not destroyed its architectural integrity.

Prior to 1949 the duplex had numerous owners and occupants. In 1949 it was purchased by J. Frank and Mary S. Hock, the present owners. (SH, TR, CD) 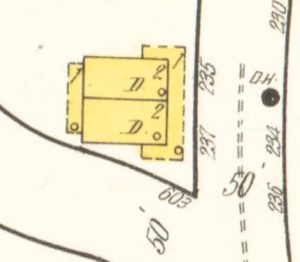