The Efird House has some of the most unusual late Victorian detailing found in the West End. It is a narrow, two-story frame house of side hall plan with a pyramidal main roof. A porch with a pedimented entrance bay, a plain balustrade, and latticework arches between the square posts wraps from the entrance around the south side of the house. A second floor porch, originally shingled, is located above the entrance bay. The right front projecting bay of the house features a spindlework sunburst decoration in the gable peak and below that stick style ornamentation prevails.

The two upper windows are connected by horizontal boards with bull’s-eye cornerblocks, and these windows are connected to the central window below by fan spandrels. Additionally, the upper windows have small panes of stained glass in the upper diagonal half of each upper sash. The north side of the house features one of the most fanciful details in the district. It is a second floor balcony supported by large triangular braces. The triangles formed by the sides of the shed roof are covered with a checkerboard pattern of plain and bull’s-eye blocks.

The balustrade of the balcony is decorated by a row of large concentric circles related to the smaller bull’s-eye blocks. In the late 1970’s the house was sheathed in aluminum siding, but most of the original detailing was left exposed so that the house still looks much as it did originally.

The house was owned by Francis B. Efird, a grocer, and his heirs from 1906 to 1976, when it was purchased by the present owner. Apparently the Efirds lived in the house for only a few years and then rented it for the remaining years. (TR, CD, OS, SH) 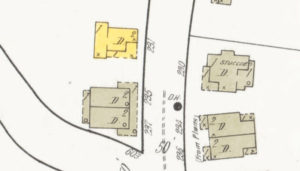