The 1917 Sanborn Map shows this house “From Plans.” The one-and-a-half-story weatherboarded frame bungalow has a broad gable roof with widely overhanging braced eaves, a front shed dormer, a shallow bay window projecting from either side of the house, and an engaged front porch with simple Classical posts and a plain balustrade. One of most interesting features is found at the rear of the house, where the main roof extends to cover an enclosed shed room and an open shed, or “false porch.” The open shed is much like the front porch, except that there is no floor or ceiling.

Chatham Manufacturing Company (Listed independently on the National Register of Historic Places, and as of 2016 being developed as industrial urban residences), which was located downhill from the house, purchased the property in 1915 and built the house not long thereafter, owning it until 1944. From then until 1964 the house was owned by Ernest F. and Mattie H. Ayers. (SH, TR, CD) 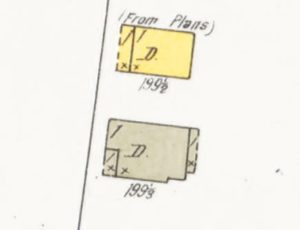