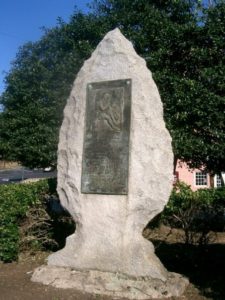 Noncontributing: Located in the center of a landscaped traffic island at the edge of the West End, this memorial marker to Daniel Boone consists of a bronze plaque on a large, vertical, granite arrowhead. The plaque includes a low relief sculpture of Boone, a map of the Boone Trail Highway, and the inscription, “In memory of trail maker hunter and pioneer Daniel Boone who hunted, fished, and fought in the streams and forests of this and adjoining counties during the middle of the 18th Century”. The plaque also states that the monument was erected by the Boone Trail Highway Association, with the committee consisting of P.H. Hanes, E.T. Mickey, T.B. Finley, J.H. Rich, W.A. Blair, O.B. Eaton, and R.S. Galloway.

[source] Between 1913 and 1938, Joseph Hampton Rich, a resident of Mocksville, NC took it upon himself to keep the memory of Daniel Boone and his travels alive. He did this by placing 358 metal tablets between Virginia Beach, Virginia and San Francisco, California. Although many of the tablets are associated with locations visited by Boone, many were simply placed wherever Mr. Rich could collect the necessary donations from communities to erect a monument. He established the Boone Trail Highway Association to further his project. From the mid-1920s to the mid-1930s, the Association published a newsletter which detailed the efforts to install new monuments.

Supposedly, the tablets were (at least partially) constructed from metal salvaged from the battleship USS Maine, which was sunk during the Spanish–American War in 1898. Typically, the tablets were located near schools, government buildings, or along old highway routes. Over the years, many of the markers have been lost to highway construction and general urban sprawl.