The Campbell House is a two-story frame, boldly-detailed Colonial Revival house. Broad, pedimented gables are shingled and bracketed, while the main roof cornice features widely overhanging eaves with large paired brackets and a paneled frieze. Windows are nine-over-nine sash, and the main glass-paneled entrance has plain sidelights and a broad fanlight transom. One of the primary stylistic elements of the house is the front porch, which extends on the south side to form a porte-cochere. It has Roman Doric columns set on brick plinths, a plain balustrade, and a projecting pedimented entrance bay with full columns and a vaulted ceiling. In the last decade the house was aluminum sided, but this has had little effect on its overall architectural integrity. 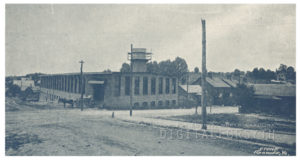 Luther L. Campbell, an employee of Maline Mills (pictured here on South Marshall Street), purchased the property in 1920. By 1923 he was listed in the city directory at this location. The property remained in his family ownership until 1940, after which it has had a long succession of Owners. (TR, CD, SH)