The Nash House is difficult to see at present because of a (historically inappropriate) tall vertical board fence surrounding the property. The house itself remains little-altered from its original appearance, as shown in the prestigious 1924 publication, Art Work of Piedmont Section of North Carolina. It is a two-story, foursquare, stuccoed house with a bellcast pyramidal roof with widely overhanging eaves, a front hipped dormer, paired nine-over-one sash windows, and a front porch with tapered wood posts and simple curvilinear brackets. 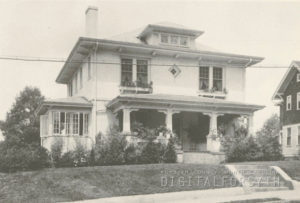 The house was first listed in the 1923 city directory as the residence of A.L. and Berta Caudle, but in February of that year Alphon V. Nash, owner of A.V. Nash and Sons (real estate, rentals, and insurance), purchased the property. He and his family occupied the house until at least 1950, thereafter retaining ownership and renting the property until 1971.

Behind the house is a two-car, gable-roofed, frame garage of recent construction date (noncontributing).