This typical early twentieth century cottage is a one-story frame dwelling with a hipped and gabled roof, a right front projecting bay, a porch across two thirds of the facade with turned posts and sawnwork brackets, and a rear ell. In mid-century it was sheathed with asbestos shingles, but the late Victorian form and detailing of the house still make a positive contribution to the architectural character of the West End.

The house is shown on the 1912 Sanborn Map, and local tradition claims it was built circa 1906. For much of its history the house appears to have been used as rental property. The longest owner-occupant was Mildred F. Bennett, who owned the house from 1939 to 1980, and lived there at least through 1965. (TR, CD, Sl1, I­ Lillian Lumley) 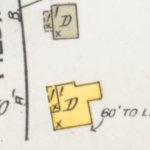 After an extensive renovation earlier in the year (including the removal of the historically inappropriate asbestos shingles to expose the original wood siding), the Bennett house was a featured property on the West End Association Holiday Homes Tour in 2016.