The Gentry House is one of the most architecturally significant houses in the West End. The massive two-story brick dwelling was designed in an eclectic combination of the Colonial Revival and Craftsman styles by prominent local architect C.G.Humphreys. Only minor changes, mostly on the interior, have altered the original appearance of the house.

The exterior is characterized by Flemish bond brickwork; a clay tile-covered hip roof with widely overhanging boxed and bracketed eaves; matching dormers; and a heavy front porch and matching north side porte-cochere with paired Roman Doric posts, brick plinths, a solid brick balustrade, and a cornice repeating that of the main roof. The main entrance has side lights and a broad fanlight transom. Balancing the porte-cochere is a sun porch on the south side of the house. It includes an unusual interior fish pond. Many details, such as the cement flower boxes supported by heavy brackets and attached to the front porch, emphasize the sophistication of this house.

The interior expands upon the sophistication of the exterior with such features as parquet floors, high paneled wainscots, wood beamed ceilings, molded plaster cornices, a variety of wood, brick, and tile mantels; the one in the stair hall having an inset metal relief sculpture of a Classical scene; a Colonial Revival stair which encircles the perimeter of the stair hall, and a simple yet glorious stained and leaded glass triptych window at the stair landing. Like many of the houses in the West End, the Gentry House has a second floor rear sleeping porch. Complementing the massive but refined character of the house is the granite retaining wall with ramped top which borders the front yard and turns up the driveway and front walk steps. 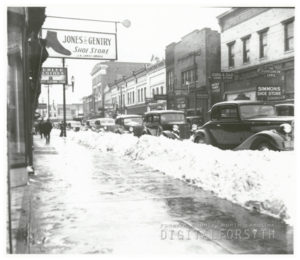 During the early 1910’s Julius J. and Lula Gentry purchased several lots at this location, and in 1917 their house was shown on the Sanborn Map “from plans” (see below). Gentry was president of Jones and Gentry Company, a shoe store. The house stayed in the Gentry family until 1941 when it was purchased by R.W. and Matie Ellen McDaniel. Several owners followed, and in 1962 the house became the Fellowship Home, a halfway house for recovering alcoholic men, its present use. (SH, D, TR, CD, WSCI)