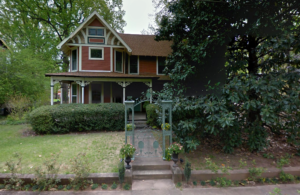 The Moir-Salmons House is a turn-of-the-century dwelling of late Victorian irregular massing but sparse ornamentation. At present it is a two-story weatherboarded frame house with a multi-gabled roof, left front and right side projecting polygonal bays, and a wrap-around porch with chamfered posts and sawnwork brackets.

Physical evidence reveals that the house grew in several stages between its original construction and 1917, when the present configuration is shown on the Sanborn Map. In mid-century, the house was divided into four apartments. Significant interior detailing remained largely intact, though the front porch was removed. The present porch, following the configuration of the earlier porch and of a design appropriate to the late nineteenth-early twentieth century period, was added in 1979. The house has been returned to a single family dwelling.

Virgil P. Moir, a wholesale grocer with J.J. Norman Company, was the original occupant. He and his wife, Minnie, lived in the house until Lee R. Salmons, a physician, purchased the property in 1919. The Salmons family occupied the house until selling it in 1938. The Siceloff family owned the house from 1944 to 1974, but for many of those years it was rented. (CD, TR, SH, OS)

Behind the house stands a noncontributing former two-car garage, now used as a storage building, with weatherboard siding and a tin shingle pyramidal roof. Probably dating from the 1920’s. It was originally located behind 638 N. Spring Street and was moved to its present site in 1979 when threatened with demolition. 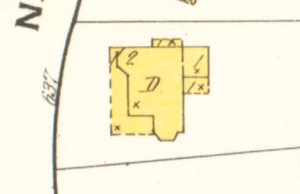