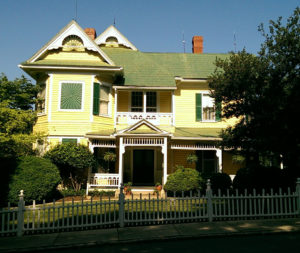 The Vaughn House is one of the oldest dwellings in the West End and is one of the best preserved examples of the Queen Anne style. It was designed by architect Hill C. Linthicum. The house is a two-story frame dwelling with novelty siding and a wide band of wood shingles between floors. It has an irregular configuration with left front and right side polygonal bays, a patterned tin shingle roof with multiple wood shingled gables with sawn and turned gable ornamentation, sunburst panels on the second story bay ends, and a wrap-around porch with square posts, an arcaded balustrade, simple curved brackets, and a plain spindle frieze. Above the pedimented entrance bay is a small porch of matching design.

Entrances on both front and side of this corner house lead to the well-preserved interior. Notable details include a broad arch separating the front hall from the rear stair hall, beaded board wainscots, heavily molded plaster cornices, elaborate plaster ceiling medallions, sliding pocket doors, embossed wallpaper, and in the dining room, an unusually handsome Victorian mantel and overmantel, a built-in side cupboard, and a warming compartment in the radiator. The landscaping complements the house with its side yard, late 1970’s picket fence, and boxwood garden in the rear.

Edgar Dalton Vaughn (1862-1934) was the original owner. He was a prominent wholesale grocer and served in 1913 on the first Board of Aldermen for the newly-consolidated city of Winston-Salem. He and his wife, Lulu, occupied the house until their deaths (1934 and 1943), after which the house was bequeathed to Margaret Vaughn Vance (Mrs. Charles Fogle Vance), who retained ownership until her heirs sold the property in 1977. (D, WSCI, FCH, Linthicum plans, Vance family information, SH)