This two-story frame house is characterized by its simplicity and is a good example of some of the less elaborate, though soundly built, houses erected in the West End during the 1910’s. The house features a gable end two-bay facade, a hip-roofed front porch with square Classical posts and a plain balustrade, two-over-two sash windows, and a small one-story rear ell. It has been covered with vinyl siding in recent years, but this has not seriously affected its integrity.

The house was probably built by contractor Henderson H. Riddle as investment property. His wife, Ida, owned it from 1912 to 1939, but they lived at 601 Spring Street (SM, D, TR, CD)

Note that the structures just East of the Riddle property no longer exist. In their location now is a small city owned “pocket park” called the Downtown Park. 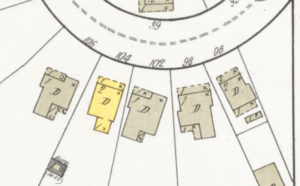