The two-story stuccoed Noble House is a handsome Colonial Revival dwelling characterized by a gable roof with gabled dormers, gable end brick chimneys, and heavy stuccoed columns supporting the three-bay facade porch. The sun room on the east side appears to be an early addition. The wooded and terraced front lawn which terminates in a granite retaining wall complements the house. The white stuccoed walls and the heavy porch columns suggest an early influence of Charles Barton Keen’s Reynolda, the R J. Reynolds residence which was constructed between 1912-1917. Indeed, there may have been a direct connection between the two houses, for this property was also owned by R.J. and Katherine S. Reynolds and was sold to E. Wright Noble, a department manager at R.J. Reynolds Tobacco, in 1919, in accordance with a 1915 agreement between the Reynolds and Noble. 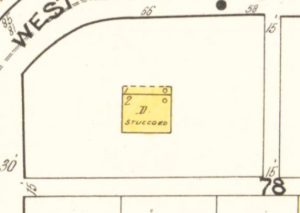