Like the two related houses to the north, this Tudor Revival-influenced dwelling is a two-story stuccoed structure. It has an unusual cross-hipped roof, a pent eave between stories, horizontal bands of six-over-one sash windows, and a Craftsman front door with a pedimented hood. Along with the other two Taylor houses in the row, this one has a stone retaining wall at the sidewalk.

William B. Taylor, Jr. built the house adjoining the rear of his father’s property on Fourth Street (160). Barrett Taylor was a salesman for Taylor Brothers Tobacco Company. He and his wife, Frances, lived in the house until the early 1920’s, but apparently used it as rental property thereafter. It was sold out of the family in 1944. (TR, CD, SH)

On the alley behind the house stands a one-story stuccoed contributing structure with a gable roof. Now used as an office, it appears to have been originally a servant’s house contemporary with the main dwelling. 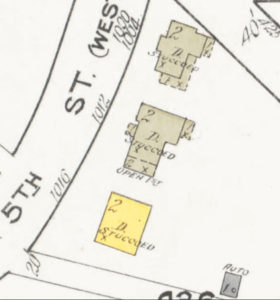