Like the houses on either side, the HB Taylor House is a Tudor Revival-influenced dwelling. The two-story stuccoed house has left front and right side gables, grouped sash and casement windows, a pent eave between stories, and a small round-arched entrance porch.

It was built by Henry B. Taylor, one of the sons of William B. Taylor who in 1916 built a row of three houses behind the elder Taylor’s house (160). HB Taylor was employed by Taylor Brothers Tobacco Company He and his wife, Rosalie, lived in the house until at least 1925, retaining ownership until 1942. (TR, CD, SM)

A small Noncontributing outbuilding of Flemish bond brick outbuilding, of undetermined original use, was probably built in the 1920’s or 1930’s. 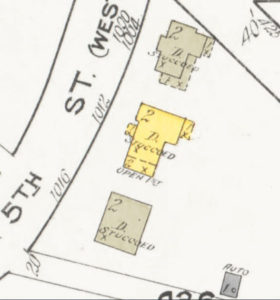