The Taylor-Northup House is one of three Tudor Revival-influenced houses in a row built in 1916 by the sons of William B. Taylor on property directly behind the elder Taylor’s house at 915 W. Fourth Street (160). The house is a two-story stuccoed structure with a gable roof, grouped windows, a Craftsman front door, and a projecting center bay whose second story is “half-timbered.” On the SW side of the house is a small porch with fat stuccoed columns.

Archibald B. Taylor built the house, but unlike his brothers with their houses, he does not appear to have lived in it. In 1945 the property was sold to Anne N. Northup, the widow of prominent local architect Willard C. Northup. She and her family occupied the house and retained ownership until 1973. (TR, CD, SH) 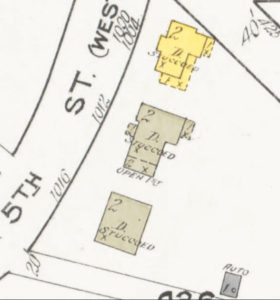