This large Craftsman bungalow is a one-and-a-half-story house with a pebbledash first story and an aluminum-sided upper story. The siding does not significantly diminish the integrity of the house. It has a broad gable roof interrupted by front and rear shed dormers, an engaged front porch with heavy pebbledash columns and balustrade, and an extension of the south side of the porch which forms a terrace. The house is prominently situated on a terraced corner lot.

From ca. 1914-1956 this was the residence of the J. Kent Sheppard family. The secretary-manager of the Sheppard Veneer Company, he was the son of Benjamin J. Sheppard, who lived immediately behind at 420 Summit Street (#106). (TR, CD, SH) 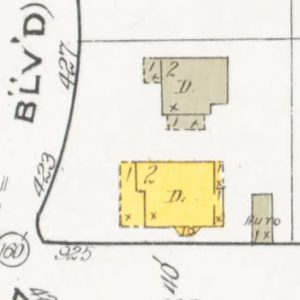